Op-Ed: Even if you hate Alexis's guts, rank her as 2nd choice anyway on November 2nd 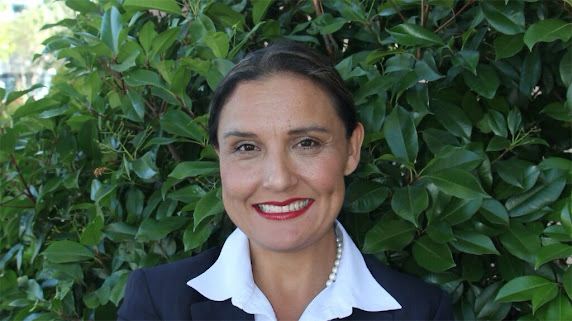 When it comes to politics in New Mexico, Santa Fe is considered a Democratic stronghold. With 71% of the county voting overwhelmingly Democratic and only 22.3% voting Republican in the last election, one would find it hard to believe that a conservative would even have a chance at winning the capital city's top job as mayor. However, the actions of the incumbent mayor Alan Webber can change that. Webber has been widely criticized by Santa Fe's majority Hispanic population and some of his former supporters for his refusal to protect the Soldiers Monument which was destroyed by violent thugs in 2020. To make matters worse, he told the Santa Fe Police Department to stand down. He also partnered with out-of-town organizations to rip down culturally significant Hispanic and Catholic artifacts through a Marxist “Culture, History, Art, Reconciliation” commission or the CHART committee. According to the Santa Fe Reporter, Webber argues that the monument's destruction prevent
Post a Comment
Read more 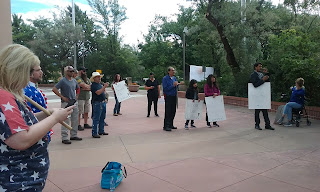 On August 23rd 2021 at 7:30 in the morning, Karen Bedonie a small businesswoman from Mexican Springs who is seeking the Republican nomination challenging incumbent Democratic governor Michelle Lujan Grisham, held a campaign event just outside the state capitol in Santa Fe, New Mexico. With over a dozen people in attendance, Bedonie joined by her daughters, alongside other speakers, spoke about her campaign and why she is running for governor. Her campaign theme is saving New Mexico from socialism and fighting for New Mexican's rights. Her background as a small business owner and as a Navajo woman, Bedonie believes that she is the right person. Despite in crowded Republican field which includes Sandoval County Commissioner Jay Block of Rio Rancho, financier Greg Zanetti of Albuquerque, ex-Gary Johnson staffer Jim Walsh of Albuquerque, state Rep. Rebecca Dow of Truth or Consequences, businessman Louie Sanchez of Albuquerque, and former mayor of Cuba, New Mexico, Ethel Maharg, she bel
Post a Comment
Read more

- March 02, 2021
After many months of delays due to the COVID-19 pandemic, we at the Shining Light Press have an update on the criminal trial of former Las Vegas mayor Tonita Gurule-Giron. According to the Las Vegas Optic ,  The attorney for former Las Vegas Mayor Tonita Gurule-Giron entered a pair of expert witnesses into the court record last week as preparation for the trial in the criminal case against her continues. Gurule-Giron’s attorney, JoHanna Cox, submitted the names of Craig Martin and Thomas Blog to the Fourth Judicial Court last Friday, both of whom will be called to the witness stand by the defense during the trial, which is expected to begin i n May. Martin, who resides in Las Vegas, is the owner of Martin’s Consulting, Instruction and Investigations. According to court records, Martin will testify “about the police investigation, search warrants, investigation and techniques used by the State in developing the charges against Defendant.” He is also expected to offer his opinion on the
Post a Comment
Read more

What Happens In Vegas Doesn't Always Stay In Vegas

- February 11, 2020
They say what happens in Vegas stays in Vegas. Well, in Las Vegas, New Mexico, that is not the case. According to the local  newspaper , Mayor Tonita Gurule-Giron was charged with six felonies in December 2019 in connection to an ongoing investigation into allegations of bid-rigging, fraud and abuse of power. Gurule-Giron faces felony charges of official acts for personal financial interest, ethical principles of public service, soliciting or receiving illegal kickbacks, conspiracy to commit making or permitting false public voucher, unlawful interest in a public contract and demanding or receiving bribe by public officer or public employee. On January 6, of this year, she faced her first court hearing in District Court where she officially pled not guilty to the charges. One of the terms of her bail in the criminal case was to avoid all contact with potential witnesses in the criminal investigation, putting her ability to attend City Council meetings into question. Several curr
2 comments
Read more

Let Me Introduce Myself....